In a nutshell, it’s designed by BMW North America, wind tunnel tested at A2 in North Carolina and offered direct from the manufacturer. And by direct, we mean it ships directly from the factory in China anywhere in the world. For the full scoop on the brand and company, check this post out.

The Alize is one of two road bikes offered and is the lighter model. The Diablo is the (very slightly) heavier, beefier frame, which Evan rode briefly and has a few comments on at the bottom of this review.

The Neil Pryde road bikes are designed using FEA analysis and an exoskeleton design that’s translated into a monocoque carbon frame with external stiffness ribs. These are visible as some of the sharp edges on both frame and fork. Lastly, there are continuous carbon fibers running through tubes and joints. The result is an incredibly stiff frame.

Some of the hard edges and shaping do more than stiffen the frame, they create a pretty slippery shape in the wind. At first glance, you wouldn’t think this is an aero frame. The front end is blunt, presenting a wide, almost flat surface across the front of the headtube and fork legs. Thanks to computational fluid dynamics and wind tunnel testing, appearances can be deceiving. The entire downtube and seat tube is shaped as an extended Kammtail, which is essentially a tear drop shape with part of the tail cut off. To the air, it mimics closely enough the effect of having the full tail and minimized turbulence behind it.

When I was there to check out Hincapie’s wind tunnel clothing test, I asked them about the Alize, to A2′s bike program director, Mike Giraud, replied: “For a company that put this much effort into their first bike’s design, they did really well.”

On our first ride, U.S. rep Clive de Sousa brought along a Diablo (center) for Evan to ride and his own bike (right). Personally, we liked the stealthy matte black carbon of our test bikes, but the paint jobs are pretty sharp, too. My XL Alize weighed in around 16.5lbs with full Ultegra and 2011 Mavic Ksyrium Elites and Hutchinson Atom Comps, plus two plastic Elite bottle cages. Evan’s Small Diablo was spec’d almost identically and only weighed a few ounces more. (Both were weighed before we put pedals on them, and both were brand spankin’ new.

Claimed frame weight is 1040g (56cm) for the frame and 350g for the fork. 1390g total. The blunt flatness of the headtube proved to be rather difficult to represent well in a photograph, but trust me, it’s big and it’s flat. It doesn’t look aero at all, but it definitely looks cool. It has a tapered 1-1/8″ to 1-1/2″ headtube, and the fork crown is perfectly matched to the shape of the headtube. From there, the fork rakes slightly forward in a straight line, with the rear of the legs getting “cut” in to form a stiffening rib.

The shift cables run inside the downtube and pop out just before the BB. Two cable holes for the front derailleur are provided, and you can mount the guide in different positions to accommodate different brands and styles of front derailleurs. Your choices are limited to braze-on style front derailleurs, there’s no way a clamp band will work on this frame.

The first thing you notice is how stiff the bike is. Literally, it feels like everything you put into it is given back in the form of forward movement. Get in the drops and hammer, stand up and crank, sprint and crush…doesn’t matter, it all goes into forward motion. Only when in the extremes of cross chaining do you hear the tell-tale signs of flex when the chain rubs the front derailleur cage a bit, but it’s minimal, and that’s always some combination of the frame, bottom bracket, crankset and chainrings. Between the quite excellent 2011 Ultegra crankset and the frame, I was unable to feel any wasted effort.

In fact, I was even able to outsprint Evan a couple times on this, which virtually never happens. These sprint contests tend to be all out, leg sapping affairs, too, and I noticed that the back end always felt planted. Some race bikes can jump around a bit when you’re pulling up hard on the cranks, too, but the Alize stayed put, which meant all the power went to the ground.

On this particular ride when I was (perhaps not smartly) taking action shots of me riding, I hit a personal-pan-pizza sized hole about 3″ deep … unexpectedly … while cornering … with one hand loosely on one hood. Nothing happened. The Alize tracked true right on through the turn. This could have very easily resulted in my sides looking like a personal-pan-pizza, but it didn’t faze the bike in the slightest.

Later, when actually trying to dive hard into high speed, off camber, downhill-to-uphill corners, the bike continued it’s admirable performance. Lastly, it passed the ol’ pedaling fast “look ma, no hands” riding test pretty well, but it did want to wander a little bit on occasion. Basically, the bike handles great. Sharp and responsive without being twitchy and tracks extremely well when you hands are on the bar and pretty well when they’re not.

Sometimes, on rough roads, you can peer over your handlebars such that front axle is just in front and watch as it shudders in and out of view behind the bar. Not so here. In fact, I rode over reflectors, rumble strips and any crappy road edge I could find and this damn thing didn’t budge. It’s freakin’ stiff.

The upside is that it handles well. The downside is that I would want to quickly swap out the alloy FSA bar and stem that came on the bike for a carbon one to soften things up a bit before they hit my hands. Road vibration wasn’t bad, but it was slightly more noticeable than on some other bikes I’ve ridden, and likely just putting a carbon handlebar on it would help quite a bit. 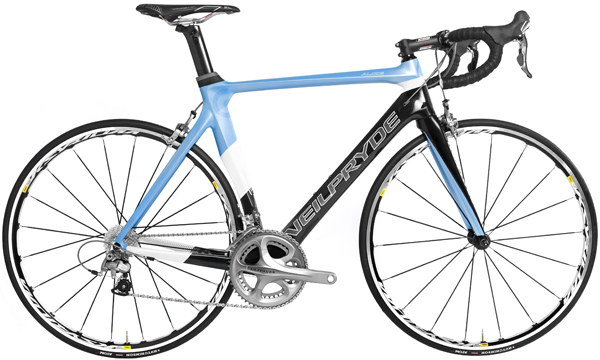 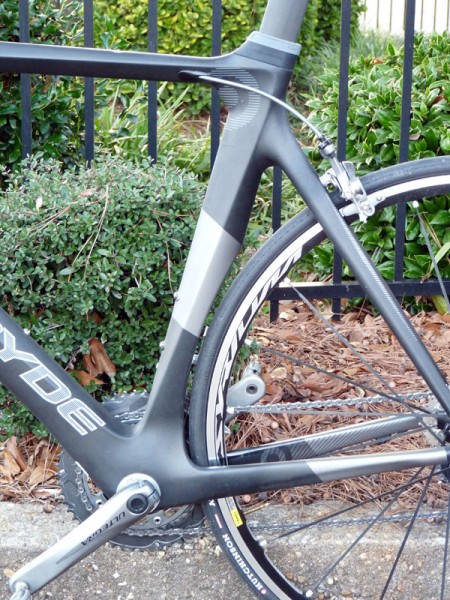 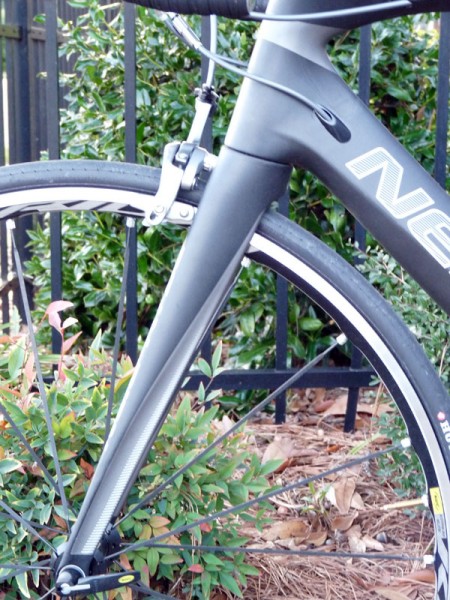 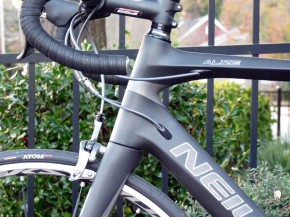 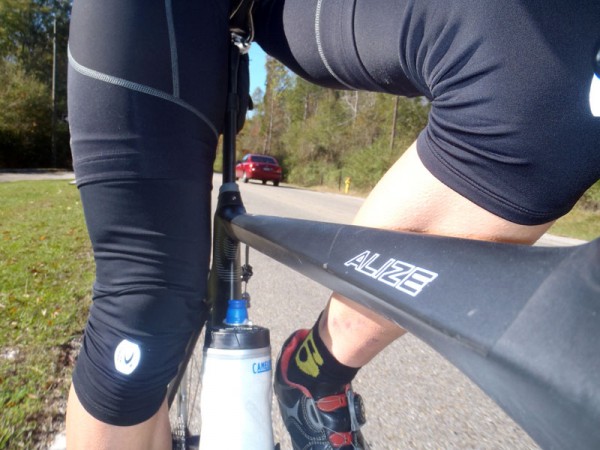 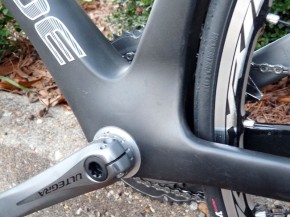 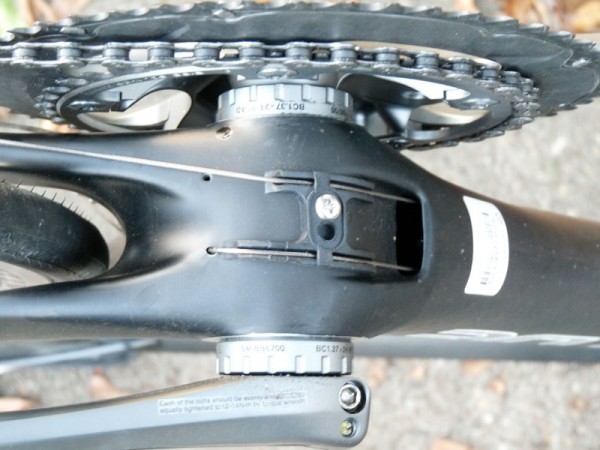 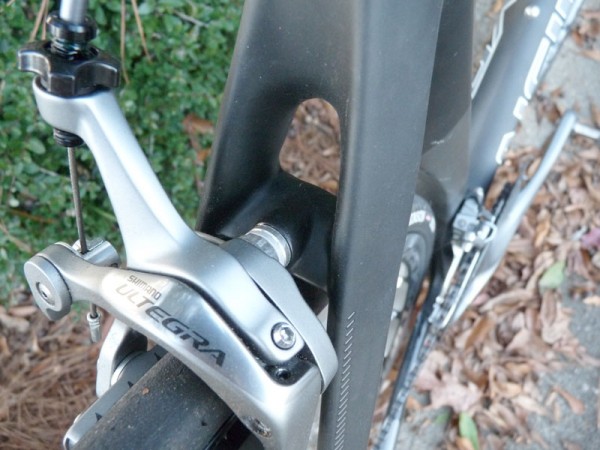 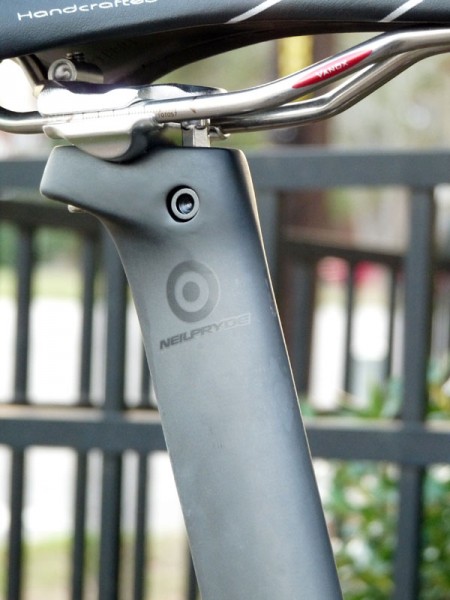 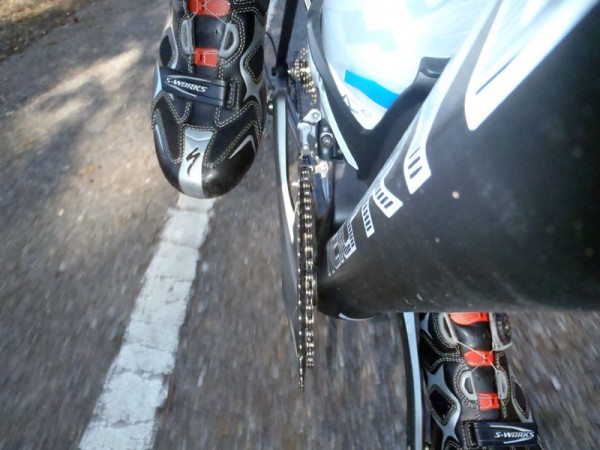 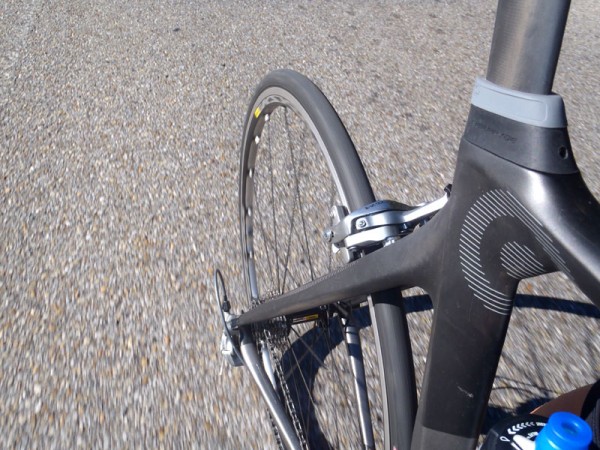 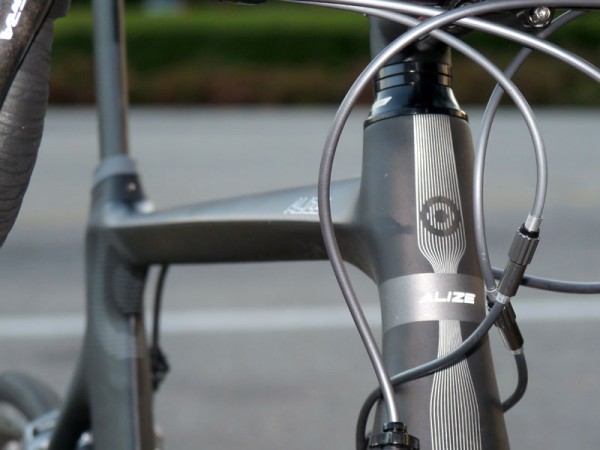 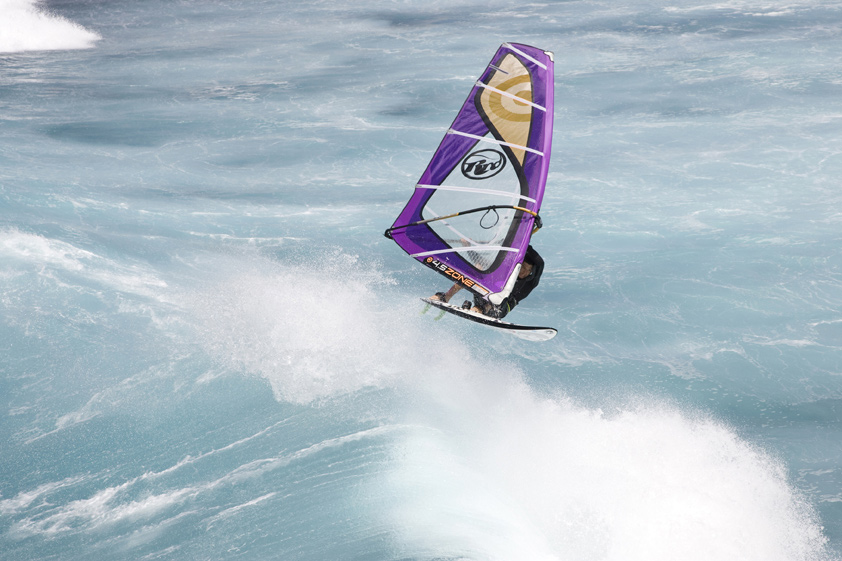 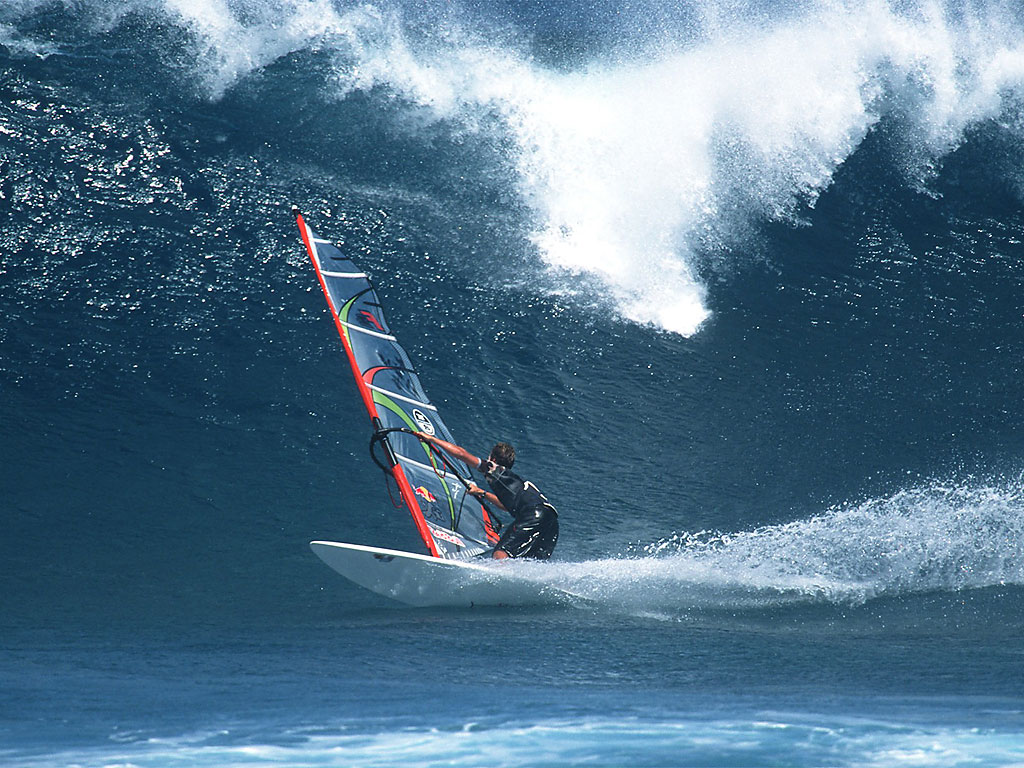