Friday 13:30, I should have left allready, but work is so busy and I am playing email pingpong with one of my biggest customers. Not a good way to get focused on the task ahead. I manage to get my big dufflebag on my back, and my massive bike box with a lot of bike gear inside on my head. 10kg on back, 21kg on head. The guy at sitting behind the glasswindow at the tubestation suddenly thought he was back in Africa as I half stumbled my way through his little gate balancing the insane looking parcel on my head. On the tube I started to notice that the 14:00 bus to the Airport was going to be a tight one… Unfortunately when the tube finally did arrive at the central station I had 4minutes to get from the Tube to the bus. Nasty, because, it gave me a theoretical chance…I can run a 4min kilometer, so I ‘could’ make it. It wasn’t rush hour, but it was freakin busy anyway…its up 2 flights of escalators, through the gates, along a really long very low ceiling corridor, through a terminal building, up two more escalators, and through the bus terminal. Add some rotating doors to that. I was sprinting, or sort of, box on head, bent knees in order not to let the box hit the ceiling lights and basically maneuvering the big box around peoples heads. The stream of comments was nonstop..WOOWW…WHAAAAT….HEEEJJMAN…HALLOO…WHAT IS THAT…. The looks of terror on peoples faces as I steamrolled through the crowds making them duck under the box and dodge for shelter. I made it JUST in time to see the bus pull away. Fantastic. The next bus was to small for my box, and so finally 30minutes and a wet t shirt later we were rolling on our way to Skavsta airport to catch our Lidl airways flight to Milan.

It was only the beginning. Taxi driver, bus drivers, and basically anyone in Milan hated my box to, and I had to bribe some bastard to finally bring us to the final train ride to Torino. 01:30 Ruairi and I finally fell out of the train and into the arms of old pall Pieter Bas and Kristel that made the one hour drive from Bardonecchia where the start of the tour is. Boxed nicely stacked onto the roof of the car, and at 03:00 we stood in the front of our ex Olympics 2006 accomodation surrounded by the dark silhouettes of the fantastic Alp granite.

Today, it was great to catch up again with my old buddies, and some new faces in the team. Spirits were high to say the least. Bikes were all groomed and att 11:00 Bas, Ruairi and I felt we needed to go for a ride. Don’t go left was the advice of many…it just goes straight up. We turned left. I hardly reckognized my own bike..never, never had everything felt so smooth, shifted so well, and felt so good. Hours with the polishing cloth well spent! Ruairi headed back after 150mtrs of climbing and Bas and I rode to the top of the first climb of tomorrows stage. A nice 500meter warmup climb. It felt great, and we chatted so much that suddenly we noticed we ran out of mountain to climb and turned back down. Now Here is where my problems start…I hate descending. I am so slow Bas several times thought I had a puncture..he rolls like a mad man and I hardly dare to watch. Hands cramping from squeezing the breaks.

So, now, stumachs are filled with food, cars are packed with our gear, 365 powerbars have been divided, a logistical plan with our 3 cars so delicately designed that I completely lost track on what where and when I will see my dry gear again.

Tomorrow we have 2 big climbs, a huuuuge descent, and then Alp D’Huez, a 1000meter timed climb where they will hand out a dotted shirt for the fastest time. If I get there in descent shape, I might give it a little push there. But, day 2 is looming over our head, and that has twice the amount of climbing… 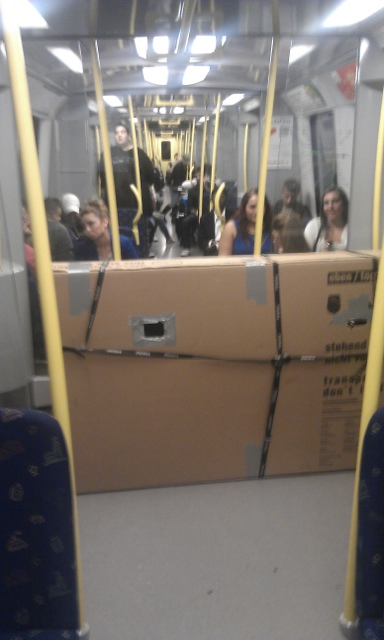 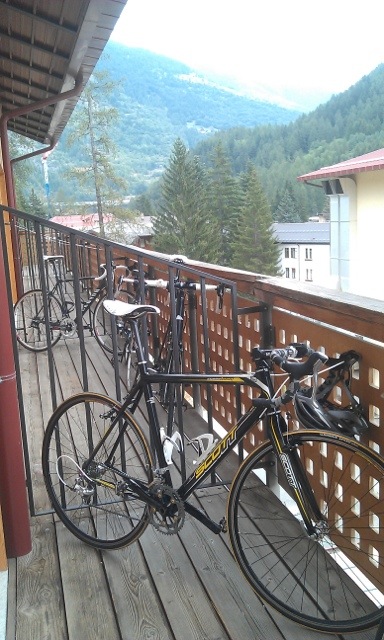 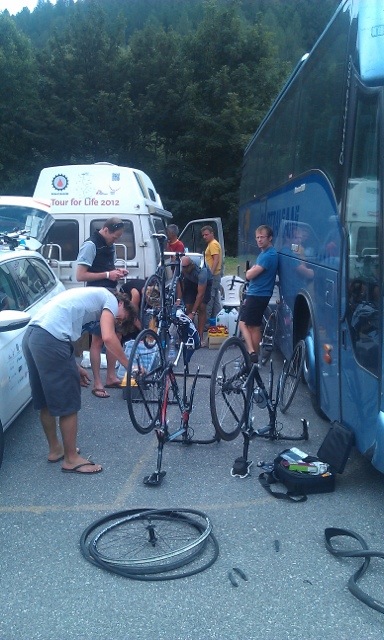 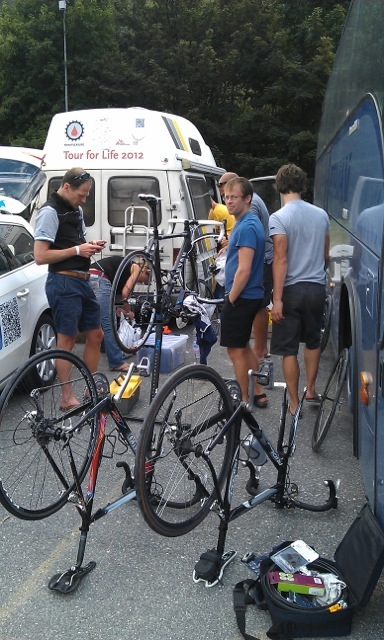 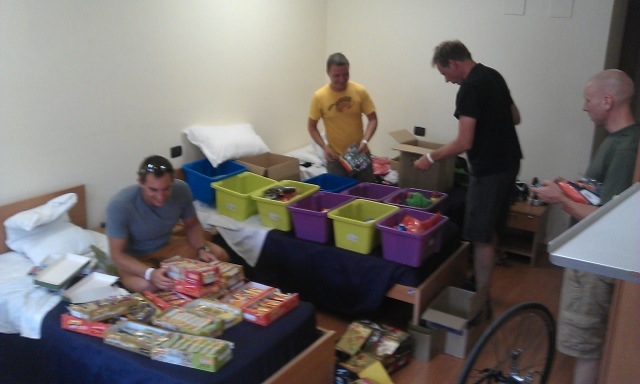 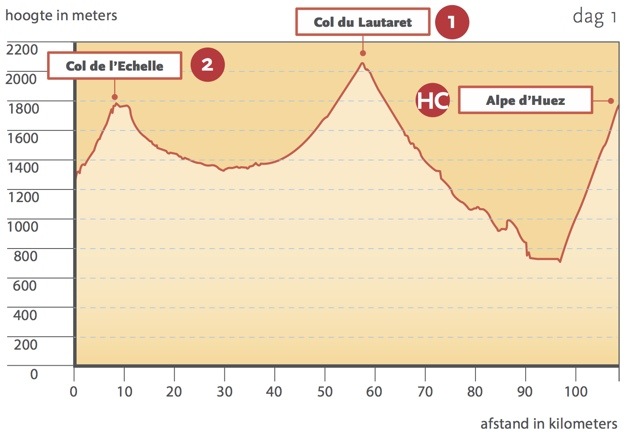