The plan was to enjoy the scenery and have fun. As a bonus I ended up with some decent results  … perhaps because I wasn’t thinking about them 🙂 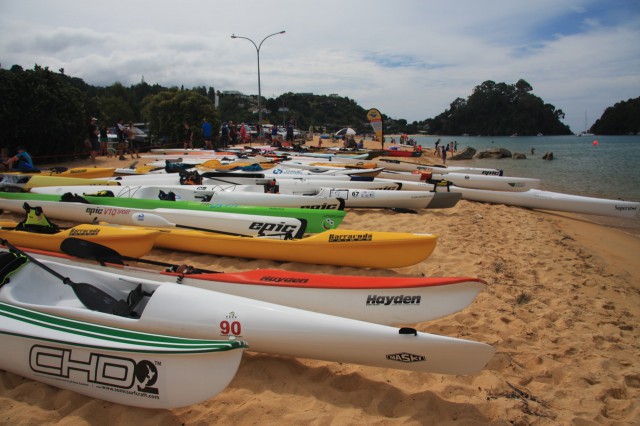 (the scene at the beach prior to the start)

Saturday was the premier event — a 2.5 hour run, bike and paddle race. After a short 12 min run over a steep hill, we jumped in our kayaks and battled the nasty side waves. 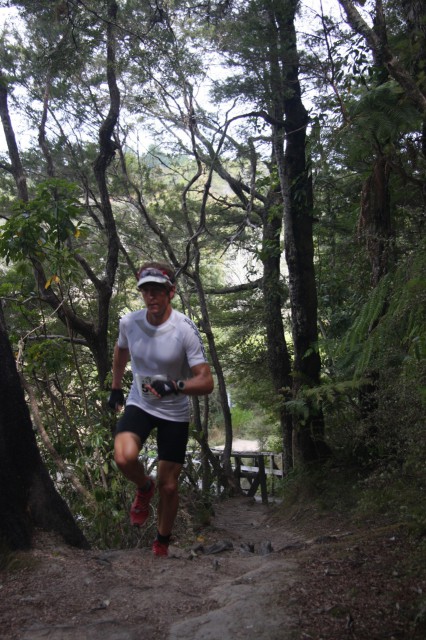 (Just 5 minutes into the race)

The waves were bouncing off the cliffs like a washing machine. I watched the guy in front of me involuntarily exit his kayak (swim!). The natural reaction in this situation is to think “don’t do that” but just thinking “don’t do that” is usually enough to make you do that! I survived the paddle, but it took me 48 min and the leaders closer to 40.

I jumped on the mountain bike and my legs felt great. I spun up the hill and before long was passing some of those talented kayakers.

When I started the bike descent I heard I was only 3 minutes behind Nathan Faave, who was in third place. I relied on my bike skills and reeled back a couple of minutes on him. I saw him leaving on the last run just as I came in on the bike. 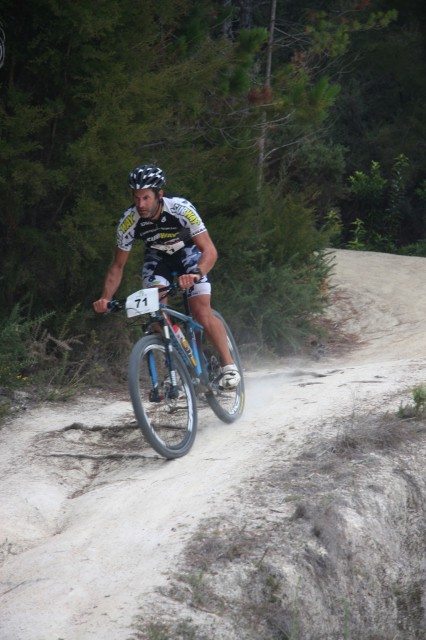 My legs were burning, but there wasn’t much left now. I pushed hard but ended up finishing 90 seconds behind Nathan, who was also the race director 🙂

A little re-cap here from Sportzhub.

Turns out I didn’t have the single fastest bike time — instead, I tied for the fastest bike time with a guy named Richard Ussher. But hey, when you know you can kayak faster than everybody else, you don’t need to bike so fast 🙂  (Actually Dan Busch, who lent me his other surfski, had the fastest paddle time, catching Richard at the end of the paddle).

On Sunday morning it was two laps on the same MTB course we did the day before, so I knew the turns.  My  multisport friends pointed out three hot shots in matching bike kits and said they were the ones to beat. I took note of their purple jerseys … 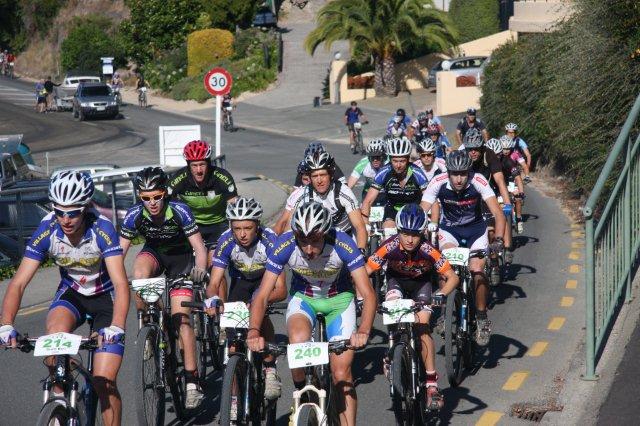 (I am in the white jersey, center of the picture, just behind the purple jerseys. I was gaining a little protection from the wind on the first climb)

Maybe it was a birthday present from a higher power, but I had some kind of “re-bound” reaction from the hard race on Saturday — rather than being tired, my legs were awakened from that high intensity effort. I pedaled hard without feeling that awful “lead” feeling in the legs. Before long it was just me and two of the purple bike jerseys (the third one got dropped when we had to carry our bikes over a gate that the race directors forgot to open — my adventure racing skills came in handy…).

I finished the first lap still in third place, about 50 seconds behind the two leaders. Since they were both on the same team I knew they would be helping each other on the long asphalt climb, drafting against the headwind.  I pushed hard and …  my legs answered again !

With 1 km to the finish I saw one of the leaders on the side of the trail. I yelled at him “What happen — did you get a flat ?!” He muttered something under his breath that I didn’t hear. I didn’t ask a second time. I  put in a massive 30 second sprint to make sure he didn’t jump on my wheel. 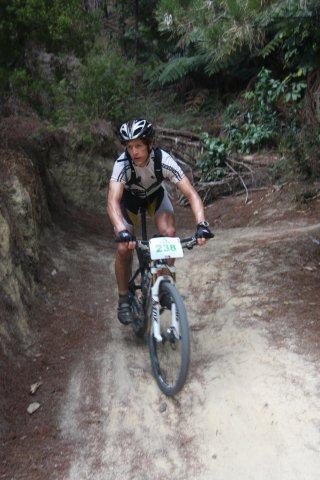 (just minutes after moving up to second place and only a km left to the finish !)

I sprinted to the finish, but it wasn’t enough to beat the youngster who was only 16 years old and weighed 43 kg (no joke).

I tried to find the third place guy to ask what happened, but he disappeared. When I asked his teammate — who had won — he said “yeah, he usually goes to the side of the trail and pretends he has a bike problem whenever he bonks.” 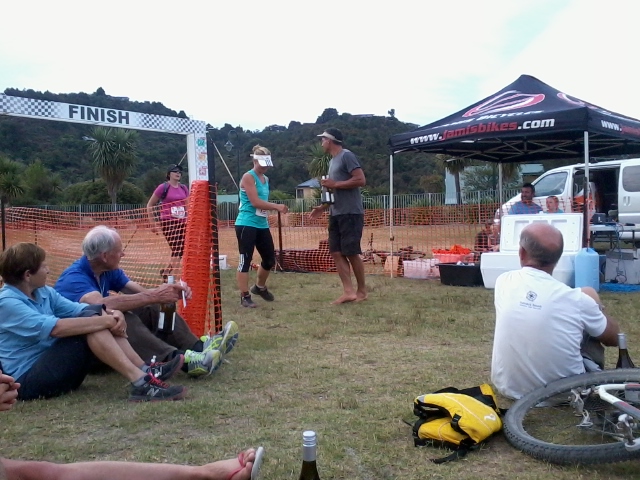 (The prize giving.  The guy on the ground to the left was in the over 70 division and did the whole multisport race – nice !)

After a little rest in the shade it was time to face the reality of dragging my tired body out to compete in my weakest discipline. The wind had kicked up and made yesterday’s kayak leg look like child’s play.

5 minutes before the race I saw somebody had a FENN Elite SL, which is the same boat I have in Sweden. I asked half-jokingly if the guy wanted to trade with the V12 I was paddling (which I’m not as comfortable in). He said “sure, no problem.” Well, that was a good start !

Nathan Faave directed the 15 of us to divide up into groups depending on how fast/slow we thought we would be. The slowest go first, so that everybody finishes together. I volunteered to go first, thinking I might be spending some time practicing my “re-entry” skills out there.

Just before taking off from the beach Nathan said to me “you have a leash right?” (i.e., to tie the boat to my leg in case I fall out). I said no. He said, “Well, don’t fall out then!”

I pushed my comfort zone way past any level I’ve ever pushed it. The waves were huge relative to the boat and I was pushed around like a little pin ball. My mental focus was 110% to keep the boat upright. I don’t know how I did it, but I kept everything going forward into a driving headwind (with swells from the right) and a tricky downwind section for 75 minutes. 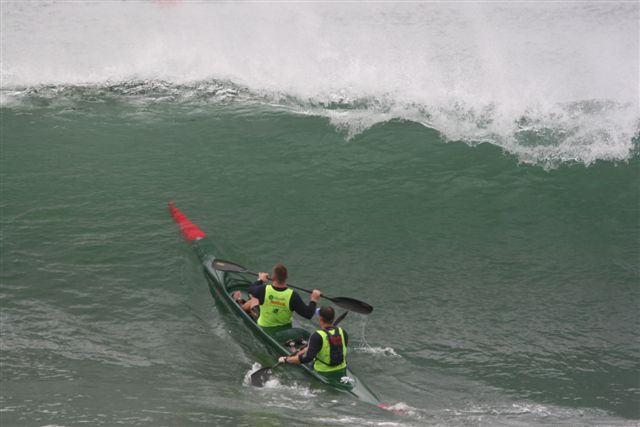 Then, with 10 minutes left, I lost my concentration and fell in.

I failed in my first 2 attemps at climbing back in and then the boat got away. In 1 second, it had drifted 20 meters (!) and I was left bobbing in the ocean. Just a few minutes before the safety boat had raced ahead to check on the other racers. I was alone at sea, but at least the water was warm…

After a few minutes a tourist boat came by. I stuck my paddle up high so he could see me (otherwise I disappeared between the swells). He gave me a ride over to my ski — which was now a few hundred meters away — and I jumped off the boat and into the water to try another re-mount. Just then Nathan Faave paddles up from behind (he had started 20 minutes after me, but had easily caught me by now). He gave me that “I told you so” look, but was kind enough to hold my ski so I could climb in.  He joked at the boat captain: “It’s always a damn foreigner we have to rescue, isn’t it?”

Huge thanks to both Richard Ussher and Dan Busch for helping out the damn foreginer with all the multisport gear I borrowed.

Thanks also to Colin Pearson for some great photos. I shared a campsite with him and his son Jordan, who is only 18 years old and raced the Coast to Coast this year. Here is his “young multisport” blog

PS All the results here