Surfski racing is a dynamic sport, beloved by many of its participants for the opportunity to test their skills as an ocean paddler – which could be described as an art form when done at a high level. Wind and waves add “x-factor” elements to surfski races that separate the purely fit paddlers from those that know how to use the energy in the water to their full advantage.

Still, it is a race. And when paddlers are locked into a competition, tactics and strategy are just as essential as strength, endurance and ocean prowess. One of the most “interactive” skill sets a paddler needs to race tactically and be competitive: wash riding. Wash riding, the watersports version of drafting in cycling, amounts to riding the waves put off by another paddler’s boat, to the sides and at their stern. The ability to do this competently allows you to conserve energy, hang with faster paddlers and keep tabs on the competition.

World Champion surfski paddler Sean Rice has raced all over the world, on all types of courses and against the best competitors in the sport. No stranger to race tactics and planning, Sean has shared his thoughts with us on wash riding for the competitive paddler, and gives some great insight into the intricacies that make it such a vital skill.

Many surfski events have portions or even entire courses of flatwater – whether by design or lack of wind on race day. Paddlers tend to group up in these conditions, much like marathon racing. Given this fact, do you consider wash riding an essential skill for surfski racers?

Sean: Wash riding (also referred to as slip or wake riding) is an essential skill for any surfski paddler. If done correctly wash riding can save you a lot of energy and can very well have an impact on the tactics you may use in a race. Even in the roughest of conditions you will see the top guys paddling nose to tail, heading along trying to get some help from whatever wave there might be coming off the person who is leading. The only time you don’t ride wave is during any sort of downwind, or where you are chasing swells. It’s also a good idea to give the wave riding a miss in the surf zone.

Is it a skill you recommend practicing with other paddlers? How frequently?

Sean: Like any skill this one takes practice – lots of practice! But once you get it right then life becomes a whole lot easier! You can save valuable energy while others do the work. Sounds pretty cool right?! Practice wave riding whenever you can. The next time you have a faster paddler passing you on the water try your best to hop onto their wave. It might only be 20 seconds of help but soon you will be able to “hang” there indefinitely. If you paddle in a group then get everyone to try forming a racing pack. You will improve quickly.

How much effort do you conserve while riding the wake of another paddler?

Sean: It’s hard to say because this depends on a few variables. Of course the water conditions will influence the wave, but also the speed the leader is going will affect the angle of the wave coming off their boat. The faster the pace then the less of an angle the wave will be at, making it slightly more difficult to ride. If the pace is fast then move the position of your boat slightly further back to compensate for the change in angle of the wave. Heavier guys also give off a larger wave than the light guys so try line yourself up next to some one like me and you should get a great ride! You can easily save 10-20% effort depending on those variables.

If it is just you and one other paddler, where is the best place to position yourself to catch the best wave off of their boat?

Here are some rough rules:

• Always make sure your nose is angled down hill so that you are surfing down the wave and not climbing over it. You will feel the difference quickly, believe me!

• Gently steer away from the person who is pulling, as the angle of the wave will pull your boat towards their boat. If you get that “pull” feeling its a good thing, because it means you are actually surfing the wave. Just like a stand up surfer surfs a wave.

Is there a second position to go for if you can’t catch that primary wake?

Sean: The next best place to sit is on the tail of the person who is pulling. Leave roughly 20- 30cm worth of space between the nose of your boat and their tail. This wake is smaller but in bumpy conditions far easier to ride than the side wave.

If you are paddling in a pack of racers, of three or more, can you position yourself to take advantage of multiple wakes?

Sean: Yes, once 4 paddlers come together this creates a diamond. The person at the back position will be “on the diamond” – and they will be smiling, as they will get the benefit of the 3 other paddlers’ wakes and can save even more energy. It’s a nice ride! The only problem with being on the diamond is that you are vulnerable to any movement in the bunch that might spit you out the back of the group.

Is wash riding only viable in dead flat water, or can you draft off another paddler when the water has a little texture to it?

Sean: Depending on your skill level you can use the back wave to great effect even in bumpy conditions. This is especially true when heading into strong winds.

Are there ethics involved? Do paddlers typically share the workload when wash riding is involved in a race? What are the thoughts on a paddler riding someone’s wake for the majority of a race, then sprinting around at the finish line for the win?

Sean: There are some rules, yes:

• Never bash into the pullers paddle

• NEVER bash into the ANYONES paddle! If you do then say sorry nicely 🙂

• Of course everyone should try do the same amount of work, BUT keep an eye on the general speed of the group, as letting the weaker guys pull for too long so that you can rest might slow the overall pace down without you realizing.

• Riding wake the whole way and then sprinting away at the end is often done. It’s not cool but then at the same time the person who has been pulling for so long needs to rethink their race strategy. There will always be the argument that “a race is a race” – but try to race with some integrity – of course that’s up to each paddlers discretion.

Sean: Yes, it’s the simple theory of placing the carrot in front of a donkey to get it to walk forwards. If you can ride wave well then there’s no reason why you can’t finish with guys who are 10-20% faster than you

It can probably get easy to fall into the rhythm of riding other paddler’s wake during a race, which takes some of the strain off. When do you know it is time to attack and make your move to drop the pack!

Sean: It’s always time to attack! Ha ha…well no, not really. You need to make sure that when you make a move that it counts. Do it when you think you have the most advantage, look for the inside line etc. If you feel the other paddlers in the pack are beginning to hold a pace slower than you are comfortable with, then time to go.

Visit Sean’s coaching website YourPaddleLife to learn more about surfski technique and training from one of the worlds best paddlers! 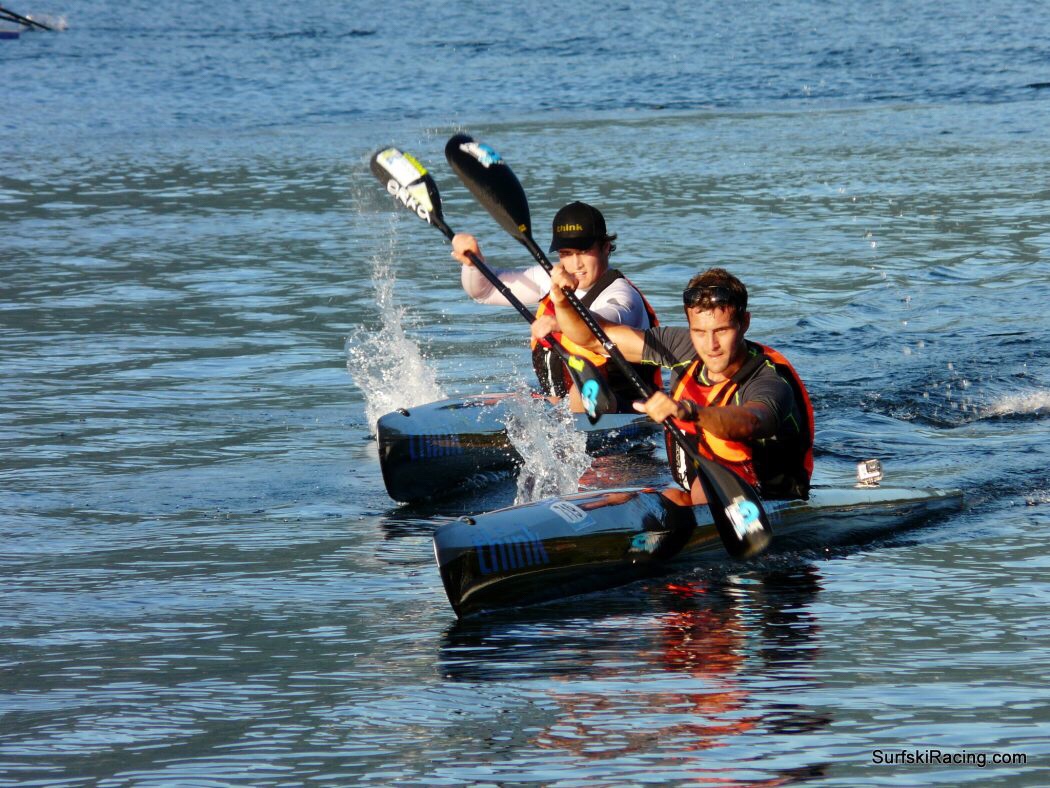